If it was only famous for music and football, Liverpool would still be at the centre of British culture. Ferry ’Cross the Mersey, Hey Jude, Shout and You’ll Never Walk Alone are part of the soundtrack of our lives – we’ll gloss over Anfield Rap – and Liverpool FC and Everton were providing priceless football memories long before the advent of the Premier League. If you want to wallow in nostalgia, you can take a tour of Anfield, retrace the footsteps of the Fab Four at The Beatles Story and grab a selfie at the revitalised Cavern Club.

Yet there’s far more to this dynamic port city in the banks of the Mersey, from dramatic riverside architecture – the “Three Graces” helped earn the city Unesco World Heritage Status – to world-class art at the Walker and Tate Liverpool. Fans of fine dining and Georgian architecture should head to Hope Street, while hipsters will prefer the independent shops on Bold Street and street food in the Baltic Triangle.

Sefton Park and its Victorian glasshouse offer a much-needed moment of calm, and Radio City Tower offers panoramic views of the city and beyond – on a clear day, you can see Snowdonia. No visit would be complete without a ferry ride across the river, though if you’re driving into Liverpool from the Wirral, you’ll have to use the rather less romantic tunnel under the Mersey.

We’ve chosen five caravan parks near Liverpool, all a 40-minute drive or less from the city centre, and listed them in order of distance, from nearest to furthest.

WHAT ELSE CAN WE DO IN THE AREA?

There’s plenty to keep caravanners occupied in and around Merseyside, but it’s best to choose a base near the sights that interest you, unless you want to mix and match.

Campsites on the Wirral offer easy access to West Kirby’s sandy beach and watersports, the real-life German submarine on display at the U-boat Story and Port Sunlight, a garden village that was built in the 19th century for workers at the Lever soap factory (with 900 listed buildings, it scrubbed up nicely).

Caravan parks near Chester offer easy access to the city’s medieval Rows and excellent shopping, and bring the seaside delights of North Wales and rugged Snowdonia within day-trip distance. If you stay west or north of Liverpool, you can head to Blackpool or Southport for a day at the seaside, check out Antony Gormley’s haunting statues on Crosby beach and visit Manchester.

Wherever you stay, you’re guaranteed a good round of golf: the Royal Birkdale, Royal Liverpool and Royal Lytham & St Anne’s courses have all hosted the Open.

Simplicity and seclusion are the big draws at this small campsite on a working farm in the heart of the Wirral, a 22-minute drive from the centre of Liverpool. Arrowe Brook Farm has five grass pitches for caravans, new showers and toilets, dishwashing sinks and electric hook-up for an extra charge. Dogs are welcome and there are footpaths that head straight into the surrounding countryside.

The site is rated as a Hideaway by the Camping and Caravanning Club, yet you’re only 10 minutes from West Kirby, for the beach and watersports, and less than 15 minutes from the Royal Liverpool Golf Club. There are pubs, shops and restaurants in Greasby, a mile away, and it’s a 10-minute walk to the Irby Mill, a cracking country boozer with a great range of real ales and a menu of British classics made from locally sourced ingredients. Greasby also has bus services to Liverpool on the 437, a 40-minute ride.

Top tip: this is a great place to park up for the night if you’re taking a ferry to Belfast or the Isle of Man

Sporty types will love this site on the banks of the Dee estuary, half an hour’s drive from Liverpool city centre and medieval Chester – it’s next to a 2,000-acre park that has a sandy beach, bird hides and a host of walking and cycling trails. Several local sailing clubs offer discounts to guests, and the intrepid can sign up for powerboating or waterskiing on West Kirby Marine Lake, 10 minutes up the road.

The site is run by the Caravan and Motorhome Club, but non-members are welcome. It has showers, toilets, electric hook-up, a laundry, a playground and a dog walking area. There’s a pub in Thurstaston, a five-minute drive away, but you’ll find a wider range of pubs, shops and restaurants in West Kirby, as well as a station with trains to the city centre, a half-hour ride. While you’re in West Kirby, walk out across the sands to the uninhabited Hilbre Islands, where you’ll see a grey seal colony in summer (for the all-important tide times, visit tidetimes.org.uk/hilbre-island-tide-times).

Top tip: ask the site staff whether the mobile fish and chip van will be visiting during your stay 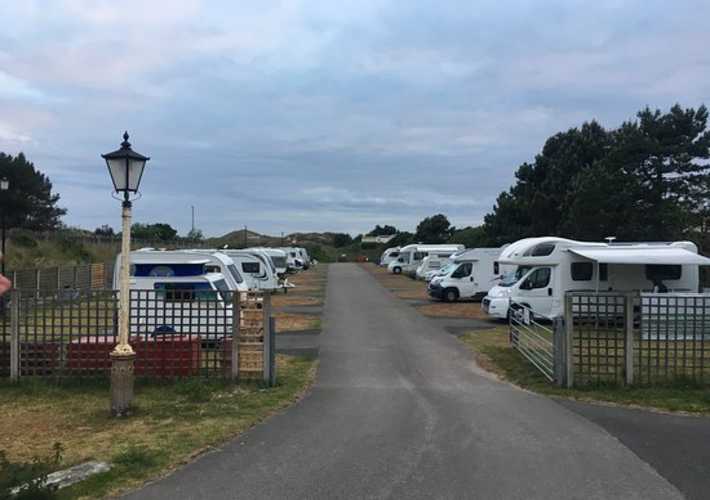 You can stroll through dunes to the beach at this friendly, family-run caravan park outside Formby, on the North Sea coast. It’s a short walk from a National Trust nature reserve where you’ve a good chance of spotting red squirrels, and there’s a choice of large hardstanding pitches or grassy spots under the pines, all with electric hook-up. Head down the coast to Crosby beach, 25 minutes away, to see Antony Gormley’s Another Place installation, 100 cast-iron figures staring enigmatically out to sea.

It’s a 40-minute drive to Liverpool – but why take the car? It’s a 20-minute walk from the caravan park to Formby station, which has services to Liverpool Central, half an hour away, and to the seaside resort of Southport, a 15-minute ride. Golfers can head to Royal Birkdale or the nearby Formby club. Formby town centre, a five-minute drive away, has a good range of pubs, restaurants and supermarkets, including M&S and Waitrose for the posher picnicker.

Top tip: youngsters will love the chance to run free in the dunes, but teens might not like the limited phone signal and the slightly dated loos and showers 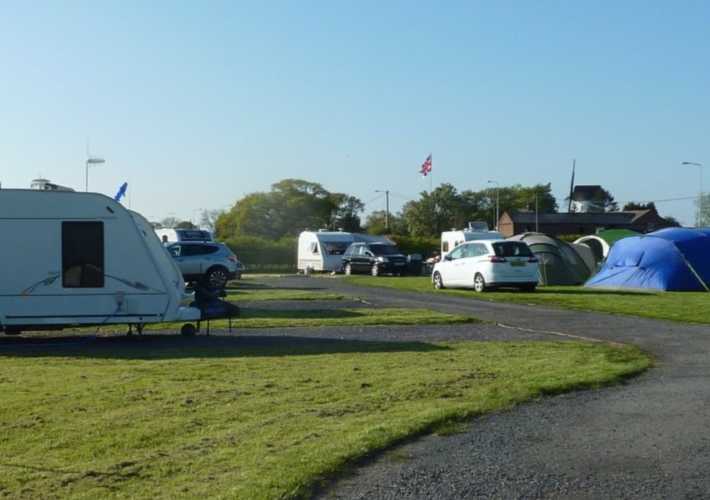 Is Wales really a country? You can thrash this one out on the way to the seaside resorts of Rhyl, Prestatyn and Colwyn Bay, or to a day’s hiking in the Snowdonia National Park – Oakwood Farm is a couple of miles from the Welsh border and less than an hour’s drive from some of its best-loved locations. It’s also a half-hour drive from Liverpool and 10 minutes from Chester, so ideal for a city break combined with lungfuls of fresh air.

The family-run caravan park has showers, toilets, electric hook-ups and free WiFi. It can’t match some of the others on this list for scenery – it’s in farmland just off the M56 – but there’s direct access to a cycle route and the kids will love the 128-acre Chester Zoo, where you’ll see everything from aardvarks to zebras. For shopping, pubs and restaurants, head into Chester on the 22 bus, which runs past the gates. It’s a 15-minute walk to the nearest pub.

Prices: from £25 a night for a family of four

Top tip: foodies should book ahead for a Michelin-starred feast at Simon Radley at Chester Grosvenor, one of several excellent restaurants in the city 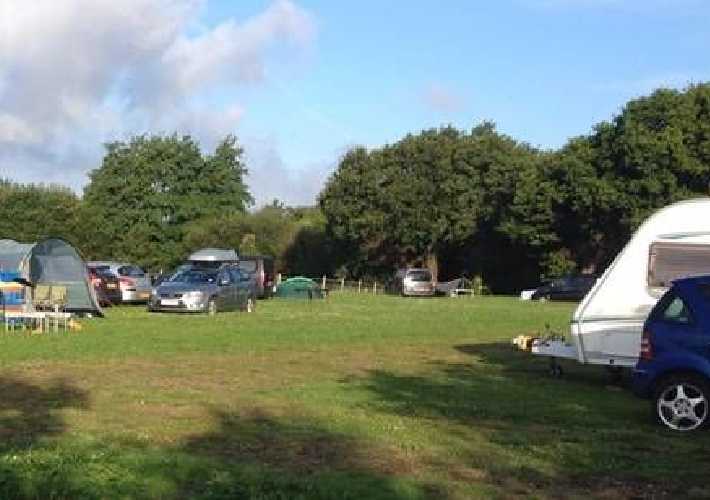 This is the perfect starting point for a whistle-stop tour of the northwest: it’s a 40-minute drive from Liverpool and less than an hour from Blackpool, Southport, Chester and Manchester, so you can cram in Scousers, scallies, shopping and the seaside, not to mention golf at Royal Birkdale or Royal Lytham & St Anne’s. You’ll be able to unwind when you get back to base, as Bridge Farm Campsite is part of a working farm, surrounded by trees and tranquil countryside. It offers riding lessons and has a coffee shop and cafe where you can have breakfast on the patio or in a heated conservatory.

The site has showers, toilets, electric hook-up and dishwashing facilities, and it’s a three-minute stroll to the Junction pub and to Rainford station, for trains to Liverpool Central (45 minutes with a change). There’s a Co-op in Rainford town, a mile away, and an Asda superstore 15 minutes down the road in St Helens. Lazy gardeners will love the farm’s nursery, which specialises in hanging baskets and sells Christmas trees ahead of the festive season.

Prices: from £17 a night for up to four people (£20 with electric hook-up). There’s a £2 a night discount for members of the Camping and Caravanning Club

Top tip: Jurgen who? This campsite is ideal for fans of rugby league, with easy access to Wigan, Widnes, Warrington and St Helens.