How to Set Up a Caravan TV Signal


Having the TV on can improve your holiday. Whether you are waiting for the weather to clear, not in the mood for going out, or just need a well-earned break, a television can come in handy when you are in any of those situations. In this article, we will discuss how you can make the most of your television and get a good signal while you are on your trip. 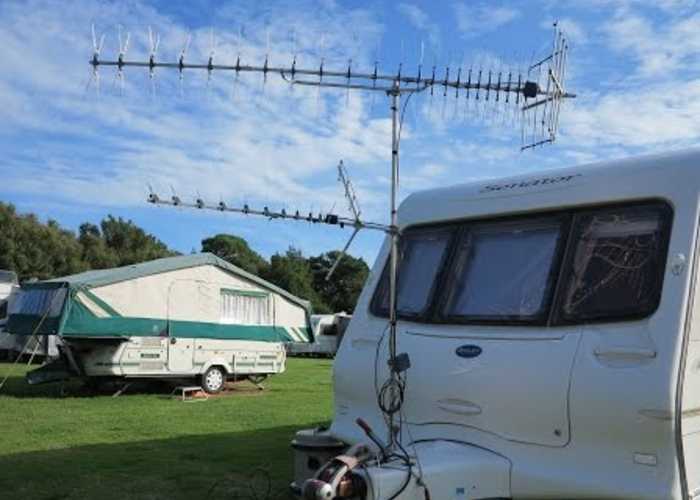 Setting Up Your Television

The first step to getting your television set up in your caravan is getting a good signal. To do this you will need to get a large enough satellite. The size of your satellite will depend on where you are travelling. Within the UK, a dish that is 40 centimetres to 65 centimetres should be more than enough to pick up UK channels. If you are travelling to Europe (this is including Ireland) you will need one that is larger than if you are just travelling in the United Kingdom.

The largest size dish that is considered safe is one with a diameter of 85 centimetres. This will likely be required if you want UK channels in Spain and Portugal. As well as considering the size, you will need to bear in mind your budget and your preferred brand. Once you have your satellite dish you will want to aim it 145 degrees with the dish facing upward 25 degrees.

As well as a satellite dish, you will need a digital signal. Sky, Freecast and Freeview all have different pros and cons to them, with different payment plans, channel options and requirements. Once you have a signal, you can attach it to your satellite and your receiver box, then connect the box to your television.

To get a good TV signal from your aerial, three things must be considered when setting up your equipment. First thing is the most obvious thing. The direction of the TV signal aerial must be facing the transmitter unless you are right next to the main transmitter or your picture will not be clear enough for you to enjoy your favourite movies and television shows. The next thing to bear in mind when setting up your aerial is the tuning of your transmitter. If it is not tuned properly, your picture will not be clear at all.

The third and final thing to bear in mind is the polarity. If the polarity is incorrect, you could lose up to 90% of your signal. If the signal strength is high, you can still watch the television, but if not, you will not be able to watch a thing. Every transmitter either has vertical or horizontal polarisation. The standard is for the main transmitter to be horizontally orientated and the relay transmitter to be vertically aligned.

This is not the case when your caravan is sited, however. You will need to fill out a form stating that there are no simultaneous television uses between your house and your caravan.

Other Ways to Watch Television

If you do not want to do any of the things we have mentioned, you can always use your laptop or computer. Many programs can be downloaded using your Wi-Fi in your home, and you can catch up on any shows you missed beforehand or watch your favourite episodes of TV shows.  You will still have to be careful because some television programs you can only download for a certain period.

Many caravan sites offer Wi-Fi so you can watch Netflix or Amazon Instant Video while on holiday. This Wi-Fi, however, can cost up to £9 a day while you are at your site. Also, the Wi-Fi signal can be inconsistent which will cause the channels to keep freezing. A portable DVD player might be an option as well. You can get one of those for a cheap price, and then you can take it with you, as well as some of your favourite DVDs.

Television is a fantastic way of improving your holiday away. Just make sure that you get a large enough satellite dish (around 40cm-65cm for UK holidays, 85cm for Portugal and Spain), that your insurers know what you have added to the caravan and that everything has been insured properly, that your aerial has been mounted properly and, the transmitters are tuned to the correct tuning. We hope that you have picked up some good advice from this article that will benefit you and improve your holiday away caravanning.

Do you need a quick release bracket for your TV? Then check out our article on them.