If you’re a fan of retro folding caravans you’ll probably already know about the famed French manufacturer of one of the first of these practical and storage space-saving creations. Although they’ve been since bought up and their folding caravan legacy has been continued to a lesser degree by the other French company Rapido, Esterel Caravans were very prolific with their releases from their inception to the early 00s.

In the following post we are going to look at Esterel and why their caravans are enduringly popular. As well as looking briefly at the company’s history, we will talk a little about some of the key folding caravan models Esterel produced over the years. Even if you are unable to buy a new Esterel, the used and vintage caravan market is full of them – you just need to persevere a little and hunt them out.

The company began life in 1964, and from then it was making folding caravans. However, it was only from 1976 onwards that they made folding caravans to the specific technique and design they became renowned for. 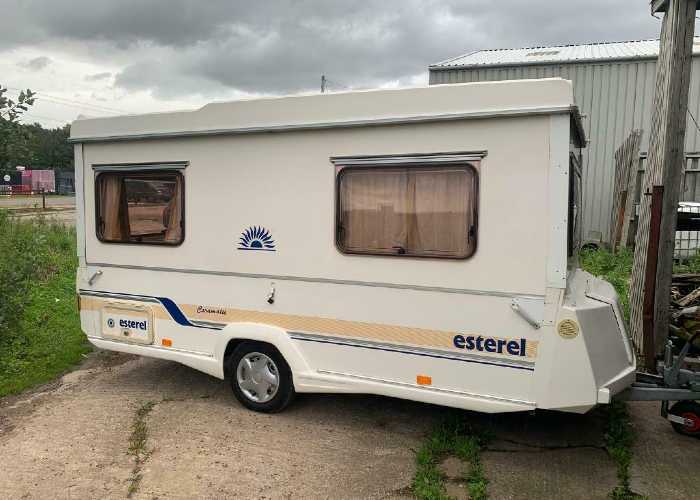 The most important and oldest folding caravan ranges that they made includes the Caramatic and the Supermatic. There were similarities between the two, such as both had cantilever kitchens, though the Supermatic, a newer model chronologically had a couple of new features as standard including the hidden gas struts and isoelectric power.

With later models of the Caramatic and Supermatic, a toilet compartment was at first a requestable extra option and then came as standard.

In time and across the different models and updated releases, second beds were added to the layout. Then even wet rooms were added also.

The Primatic was another popular and ingenious design from the company. Depending on the dimensions, you get different features as standard. Very much like other folding caravans. For instance, while longer, 424cm Primatic models had internal kitchens, others didn’t.  that featured a separate kitchen, as opposed to the cantilever one that could be used outside the caravan.

These featured a double/sitting area to the rear, along with cupboards, a fridge, wardrobe, window and other nice extra touches.

The TopVolume was the branding given to a specific form of Caramatic-like caravans that were released in Germany and had similar qualities to others in the same family, but with the addition of a fixed and fully installed roof box and cupboards.

Esterel – Worth Investing In?

We think, if you like that retro folding caravan look that you could do a lot worse than investing in one of the various models from Esterel. They are suitable for caravanners of all kinds and though the most compact and shortest models only have room for one or at a push 2 people, more expansive and generously sized options are essentially 3 and even 4-berth. While some of the older models don’t have onboard toilets, others do.

Esterel may have stopped making these beauties a while ago, after Rapido took over the name, but on the used and vintage market you still find them and there’s even an Esterel Owners Club.